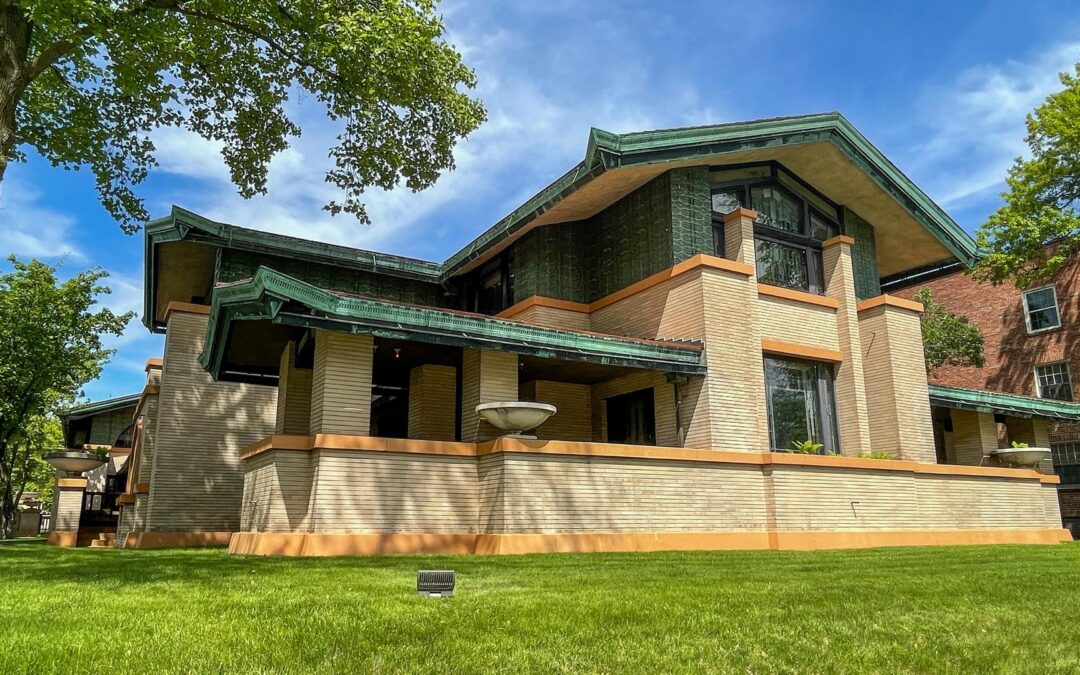 Are you ready to exit the city and settle into your own cozy home somewhere in the beautiful grassland expanse of Wisconsin? But what style of home do you prefer to build for your new life? You have probably heard of home designs popular in our area such as Craftsman, Ranch, Mid-Century Modern, Prairie, and Modern Prairie. Once you learn what each of these styles looks like, inside and out, you will be able to narrow down your search to only the styles you like. And if you are building from the ground up, you should select a builder who specializes in your preferred design style. In this feature, we take a closer look at the Prairie-style home, which has become popular again in Wisconsin and the Mid-West.

The devastation from the Great Chicago Fire of 1871 created new building opportunities for architects. One of those architects was Frank Lloyd Wright, who joined with a group of other young architects they referred to as “The New School of the Middle West.” In 1893 Wright founded his architectural practice in Oak Park on the Western edges of Chicago.

According to the Chicago Architecture Center, these architects combined the ideals of the Arts and Crafts movement with the ideas of architect Louis Sullivan. Craftsman-style homes were emerging at the time with a focus on nature, craftsmanship, and simplicity. Sullivan’s idea was distinctly American architecture rooted in nature, but with modern elements like flat planes and stylized ornamentation.

Combining these two ideas, Frank Lloyd Wright created a new style of domestic architecture which he called the “prairie-style” home. This style officially emerged in Chicago in 1901 when Wright published building plans entitled “A House in a Prairie Town.” These homes were built in prairie states and the design was influenced by the prairie landscape. And it wasn’t just homes, but schools, warehouses, and park buildings were also built in the style. Oak Park has the highest concentration of Prairie style buildings in the nation.

If you are intrigued by this style that has re-emerged as a popular design of new homes being built in Wisconsin, read on for more details that may help you decide if it is the right choice for you.

What’s Outside a Prairie-Style Home

Wright’s vision for the look of the outside of the prairie-style home intended to celebrate the long, low landscape of the Midwest. He saw the home as “married to the ground.” The emphasis is on the horizontal rather than the vertical. The low-profile house features a roof line that is flat, low-pitched, or shallow hipped and juts outward into the environment to echo the wide expanse of the prairie. There are overhanging eaves and broad chimneys, rows of windows, and often bands of stone, wood, or brick across the surface.

What’s Inside a Prairie-Style Home

Inside the home, you will find an open floor plan, strong horizontal lines, a central chimney, and built-in cabinetry. There is simple and natural woodwork with exposed beams that allow the natural wood grain to be admired. An open-concept floor plan includes a living and dining area. Originally the kitchen was hidden, but in today’s modern prairie designs, the kitchen has been opened to create an even larger entertainment space. The overall goal of the interior floor plan is to create an intentional flow from inside to outside. Windows are large and sometimes take up entire walls.

The modern prairie-style homes being built today reflect an increased desire to return to a simpler lifestyle. These functional, cozy homes may reflect an older rustic design inside, but include modern conveniences and clean horizontal lines that keep the look simple and uncluttered. These homes have a way of helping us feel like we are reconnecting to the earth in a comforting way.

Build Your Prairie Home with an Experienced Builder

A new home built with a distinctive look and character will always stand the test of time. If you are ready to build your own custom Prairie-style home, talk to the building experts at Turnkey Homes. Let us help you get started designing the home of your dreams. Visit our website at www.turnkeyhomesllc.com for more information or give us a call at (920) 470-4315.